Chain Master Wrayth is a minor antagonist in the fifth season of LEGO Ninjago: Masters of Spinjitzu. He is a spirit that was at one point banished to the Cursed Realm, but later freed by Morro to stop the Ninja.

Wrayth was at one point banished to the Cursed Realm.

Wrayth was freed from the Cursed Realm by Morro using the Allied Armor of Azure with orders to stop the Ninja while Morro sought theAirjitzu scrolls. Wrayth turned a regular cycle into the Chain Cycleand rode off into the desert.

Wrayth eventually came across the Ninja at a train station and attacked them relentlessly. Unfortunately, his chain caught on a nearby water tower and toppled it on himself. The large amount of water from it caused Wrayth to dissolve and be sent back to the Cursed Realm.

As Morro began using the Realm Crystal to unleash The Preeminent, Wrayth was able to return to Ninjago, remarking that "it's good to be back".

He has light green ghost face with a blue mask and a purple band, a shirt all destroyed with chains with black arms, and transparent green legs with grey belt. 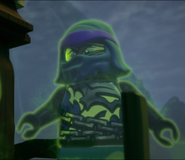 Add a photo to this gallery

Retrieved from "https://ninjagocharacters.fandom.com/wiki/Wrayth?oldid=7289"
Community content is available under CC-BY-SA unless otherwise noted.