In LEGO's Ninjago theme, the Ninja wear a variety of outfits, denoting various forms and ranks they take over the course of the story. These types mean various things to the consumer, although these changes in appearance are not particularly important, save in spinner game, where they have different levels of Spinjitzu Power.

In the pilot episode, Cole, Jay, and Zane were also seen wearing pure black versions of the basic outfit, presumably for stealth training under Sensei Wu, and unknowingly for Kai's final test to becoming a ninja.

The standard Ninja outfit features a simple gi, with the color of the gi corresponding with the wearer's element. There are three ropes being used as a belt, with the fastener bearing the symbol of the wearer's element as well. The outfit also includes a mask that covers the entire head, with a small slit for the eyes.

In the cartoon, the masks appear to be attached to the gi like hoods, as the Ninja are seen pulling them up from behind when going on a mission.

Several other color variations on the basic ninja uniform appeared in the show, including a variant of the Green Ninja suit (essentially the ZX suit without the shoulder armor or headpiece), Zane's pink gi from "Can of Worms," and the "Brown Ninja" hood periodically worn by Dareth.

In the Ninjago: Spinjitzu Spinners game, the basic ninja have 1000 SP: 400 SP in their dominant element, and 300 SP in two other elements.

The DX Ninja (Dragon eXtreme Ninja), wear ninja suits with the image of their respective elemental dragons on it. The dragons are positioned on the right side of the suits - their heads and front claws visible on the shirts and their tails coiling around the front of the pants - and each is breathing their elemental breath (Cole's Earth Dragon breathes Earth; Zane's Ice Dragon breathes Ice; Jay's Lightning Dragon breathes Lightning; and Kai's Fire Dragon breathes Fire). Their elemental symbols are now present on the backs of their suits, along with their individual name. Their Spinners are gold, with smaller details in the color of their element. In order to achieve this rank they must completely tame and understand their Elemental Dragons.

In the cartoon, the Ninja gain these uniforms when they ally with the elemental dragons in order to retrieve the Golden Weapons from the Underworld. After their adventures there, they mainly wore their normal outfits until they received their new ZX suits. 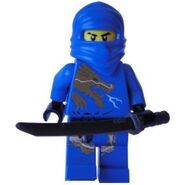 The Kendo Ninja wear their regular color-coded gis under gray armor similar to that of Samurai X. Instead of cloth masks, they wear helmets similar to those used in fencing, with a grate-like mask that protects their faces.

In the series, Kendo gear is used during the Ninja's training exercises. The Ninja also wear color-coded bandanas under their helmets, and their armor is slightly more detailed and darker in color.

The ZX (Zen eXtreme) Ninja wear gis and cloth masks similar to their normal outfits, but with the addition of armor on various parts of their body. The armor design varies between ninja, but all have a three-pronged piece on the "foreheads" of their masks and rugged armor plates on their shoulders. The back of the suit features a holder for katanas, but the Ninja keep their Golden Weapons there in the show. The dominant color of the armor varies between ninja; Kai and Zane have golden armor, while Cole and Jay have silver armor. Lloyd has an identical headpiece to Cole and Jay's ZX suits, but his shoulder pads are dark gray.

Some sets feature ZX Ninja without the shoulder armor, usually so they can fit in a vehicle or due to being in a smaller set (such as a polybag).

In the cartoon, the ninja gain their ZX armor in a package from the Mailman, delivered in "The Snake King", while Lloyd's ZX suit appears in stages throughout the series. It is first seen as a regular ninja outfit (lacking the armor on the mask and shoulders) when Kai wore it in "The Green Ninja." By the time Lloyd donned it in "All of Nothing," the headpiece was present, while the shoulder armor appeared after Lloyd was aged into a teenager in "Child's Play."

In the Spinjitzu Spinners game, ZX Ninja have 1100 SP. Their SP distribution is similar to their Kendo forms, but with an extra 100 SP in their dominant element. The only exception is Lloyd ZX, who has an even 300 SP in all four elements (for a total of 1200 SP). 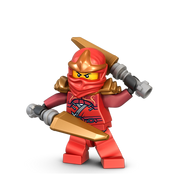 The NRG Ninja is when the Ninja unlock their True Potential and convert their dominant element into energy. The main suit consists of a mask similar to the ZX Ninja but the triangular piece on the top is transparent. The suit is dominated by an elaborate design resembling an explosion of the character's primary element, with their elemental symbol at the center of the explosion, on the left side of the chest.

In the cartoon, NRG Ninja appear as their ZX forms (including shoulderpads and suit details), but glowing with light and made of or surrounded by their respective element.

In the Spinjitzu Spinners game, they have 900 SP; 500 SP in their dominant element and 400 SP in a secondary element.

The Ninja gained new suits when they arrived at the Temple of Light and received their enhanced powers. Upon gaining these suits, the Ninja obtained new elemental weapons with similar powers to their Golden Weapons. The suits retain their ninja hoods and shoulder pads from their ZX suits, but new gi that are mostly black with their corresponding colors used for details. Additionally, Lloyd's new suit changes his headpiece and shoulder pads from silver and grey to gold. Later, during the final battle against the Overlord in "Rise of the Spinjitzu Master," Lloyd's entire suit becomes golden-colored after he unlocks his full power as the Ultimate Spinjitzu Master.

In LEGO sets, only Lloyd has shoulder pads in his Elemental form. His golden form is also slightly different from the cartoon's interpretation; the gold is darker and more metallic-looking, a few details (such as the characters on the kimono and the sash on his waist) remain green, and Lloyd's face becomes the same shade of gold as his outfit (making it appear somewhat similar to an NRG Ninja).

The Ninja received these advanced outfits from Borg Industries, along with their Techno Blades. The outfits appear as kimono-like robes in their respective ninja's color, with brown and gold highlights and a small medallion near the waist. Unlike previous outfits, the Techno Robes lack a hood, instead having color-coded bandanas that cover the lower half of the face. As such, these are the first Ninja minifigures to have hairpieces - which, naturally, are based on the characters' hairstyles in the cartoon.

As with the Kimono robes, Lloyd is the only Techno Ninja whose outfit includes shoulderpads. 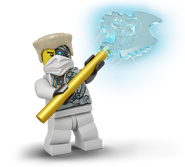 Zane in his Techno Robes 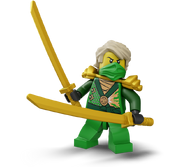 These color-coded gis have padded chestplates and a black strap running from the left shoulder to the right hip. On the strap is all four of the tournament ninjas' symbols, with only that ninja's symbol appearing on a gold badge on the right shoulder. They appear lighter than previous uniforms, exposing the arms and collars of the wearers. The hairpieces and bandanas are identical to the Techno Robe versions of the Ninja.

They got these gis from Chen when they attended the Tournament of Elements.

This version of the uniform is only worn by Kai, Jay, Cole, and Lloyd. They all come with a Jadeblade.

These outfits are a step back to the older Ninja uniforms, being full-body gis with a number of belts and pouches over the chest. They are also the first uniforms since the Kimonos to have hoods, which each bear a Japanese character on the forehead.

It is presumed that they were obtained from Chen sometime before "Spellbound", as this was their first appearance, but no background was given. (Zane and Skylor have had their outfits since "The Invitation", though Skylor only showed her hood in the next episode.)

This uniform is worn by Kai, Cole, Jay, Lloyd, and Skylor. Zane wears a modified version in his Titanium form, with metallic elements and shoulderpads resembling his ZX form's outfit.

These outfits are a similar type of robe to the Elemental Robes with each ninja wearing a mostly black gi color, shoulder pads, and highlights in tone with their elemental color.

This uniform was once again purchased by Wu some time between "The Corridor of Elders" and "Winds of Change." Lloyd wore his up until his possession by Morro, while the other Ninja wore theirs throughout the whole Ghost Warrior crisis.

Nya wears a modified version of the Deepstone robe with details that include gold shoulder pads, mostly a red colored gi, and some blue details.

The Airjitzu Ninja is very similar to the NRG varient, though it represents when the Ninja unlock Airjitzu. The main suit consists of a mask similar to the ZX Ninja but lacking decoration.

Zane, Cole, Jay, and Kai have Airjitu variants, but Lloyd lacks one, as he was possessed by Morro when the others unlocked Airjitzu.

Retrieved from "https://ninjagocharacters.fandom.com/wiki/Types_of_Ninja?oldid=7190"
Community content is available under CC-BY-SA unless otherwise noted.