Rattla is a minor antagonist in LEGO Ninjago: Masters of Spinjitzu. He is the scout of the Hypnobrai tribe, and is the worst field fighter in the Hypnobrai. He also has one eye slighter than the other. This character is friends with Skales.

Rise of the Snakes

Rattla, along with Skales, Slithraa, and Mezmo were unlocked by Lloyd Garmadon, and was one of the snakes that thought Slithraa/Lloyd's plan was genius.

Rattla, along with other soldiers and scouts, helped build Lloyd's treehouse fortress.

Rattla, while on the Serpentine bus, tried to hypnotize Zane, only to be defeated with snowballs in his eyes.

He has the same head mold as Skales Jr. 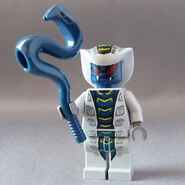 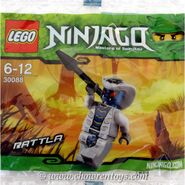 Rattla in a polybag
Add a photo to this gallery
Retrieved from "https://ninjagocharacters.fandom.com/wiki/Rattla?oldid=7346"
Community content is available under CC-BY-SA unless otherwise noted.