The Green Ninja (also known as The Chosen One) is a legendary Ninja spoken of in LEGO Ninjago: Masters of Spinjitzu. He is said to be the strongest of all Ninja, destined to defeat evil in a final climactic battle for the fate of the world.

The legend of the Green Ninja plays a major role in the first season of the cartoon, as the heroes search for his identity and eventually begin training him to fulfill his role as the Chosen One.

Rise of The Green Ninja

Kai explained how he had unlocked his True Potential, only for everyone to realize the implications for Lloyd. Quickly, the Golden Weapons were held in front of the boy, where they began floating and emitting green electricity between them - to everyone's amazement, Lloyd himself was none other than the Green Ninja.

Wu later revealed to the Ninja that he had at one time believed that Morro might become the Green Ninja. Unfortunately, when Wu shared this hope with Morro, it led Morro to develop an arrogant streak. When the Golden Weapons failed to react to him as had been foretold, Morro became furious and set out to prove himself worthy. 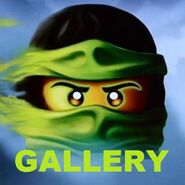 The Golden Ninja (also known as the Ultimate Spinjitzu Master) is a legendary Ninja spoken in LEGO Ninjago: Masters of Spinjitzu. The ancient hero is stated to be the most powerful Ninja, and is destined to defeat the source of evil.

The legendary Ninja is a major character who appeared in the final episode of the second season, along with a few episodes in the third season. Formerly known as the Green Ninja, the Energy Ninja became the Golden Ninja during The Final Battle between good and evil.

Rise of The Ultimate Spinjitzu Master

Lloyd unlocks his True Potential to become The Golden Ninja to unleash his Golden Dragon and defeat The Overlord.

Golden Power is the source that The Overlord could be the Golden Ninja. When Lloyd gets captured by Pythor P. Chumsworth, he went inside the Nindroid MechDragon to trap Lloyd and start the power draining to let The Overlord become the Golden Master

Giving Up Being The Golden Ninja

In The Temple of Light, Lloyd gives up his Golden Power to restore the Ninjas' elemental powers so no one could catch him.